Gastroesophageal reflux disease (GERD) is defined as the presence of symptoms (e.g. ‘heartburn’) or injury of the esophageal mucosa (e.g. esophagitis, esophageal stricture, Barrett’s disease) as a result of reflux of stomach contents into the esophagus. GERD affects 10-20% of the population at any age.
Mechanism 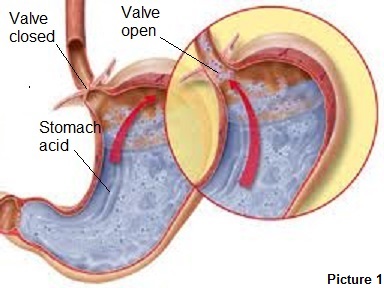 GERD symptoms can be:

‘typical’, such as heartburn and regurgitation of undigested food. These are the commonest GERD symptoms and respond to surgical treatment in more than 95% of patients.
‘atypical’, such as hoarseness, asthma, aspiration pneumonia, laryngitis, pharyngitis. These are less common GERD symptoms, are often caused by diseases other than GERD and are less likely to respond to surgical treatment.

Patients with typical GERD symptoms (e.g. heartburn) will often receive a course of medical therapy as a means of diagnosis, without prior diagnostic tests. Diagnostic testing for GERD is indicated when the diagnosis is in question (e.g. atypical symptoms only) and when surgical treatment is being considered.
Diagnostic tests 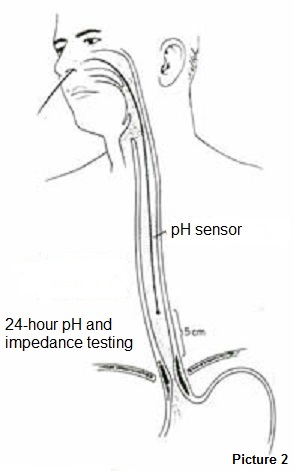 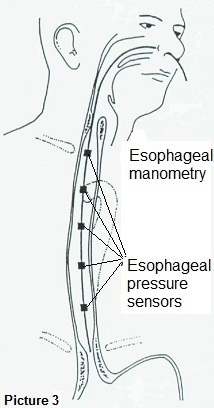 A. Conservative: all GERD patients are advised to avoid large meals, stop smoking and avoid excessive caffeine and alcohol consumption. Obese patients benefit from losing weight. Additional conservative measures include not eating 3 hours before bedtime, as GERD is exacerbated in the supine position. In most patients, conservative measures help improve GERD but are inadequate for complete symptom control.

C. Surgical: Surgical treatment of GERD aims to create a new lower esophageal sphincter mechanism, which will completely and permanently cure GERD. This is usually achieved by wrapping the uppermost part of the stomach aroung the lower esophagus in a 360° fashion (Nissen fundoplication, Pictures 4 and 5A). 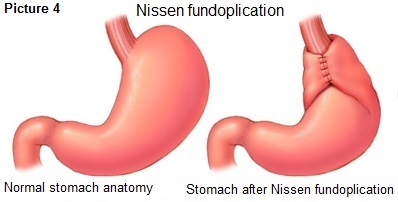 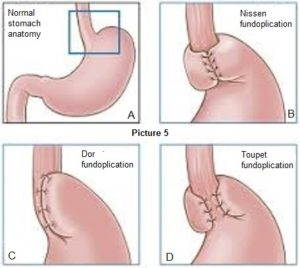 In patients with reduced esophageal muscle function or with difficulty swallowing, a partial fundoplication (Dor, 180°, Picture 5C) or (Toupet, 270°, Picture 5D) is created.

A hiatal hernia, if present, is fixed at the same operation. In patients with body mass index over 35, gastric bypass surgery is recommended instead of fundoplication in order to treat obesity and GERD.

Indications for surgical treatment: The main indication for surgery is failure of medical therapy due to persistent symptoms or esophageal injury. Additional indications are medication intolerance and GERD in young patients who do not wish to take life-long medications.

Contraindications to surgical treatment: Coexisting medical conditions that increase the risk of complications, such as heart and lung disease and some types of prior esophageal or stomach surgery.

Recovery: Most patients are discharged from hospital 1-2 days after surgery and feel well enough to ambulate on the day of surgery. Diet is restricted to liquids for 3 days and pureed foods for an additional 3 days. Paracetamol and non-steroidal analgesics are usually adequate pain treatment and are needed for approximately 1 week in most cases. Lifting heavy objects (> 5 kg) is to be avoided for 6 weeks after surgery.

Achalasia affects patients between the ages of 30 and 60 years, has gradually worsening symptoms and causes the esophagus to dilate over many years.

Esophageal pressure measurement (manometry) is necessary to diagnose achalasia (Picture 2). It involves inserting pressure sensors into the esophagus to measure esophageal muscle and sphincter function during swallowing. Esophagoscopy (‘upper endoscopy’) and esophagography (x-rays of the esophagus after swallowing liquid contrast) are also helpful. 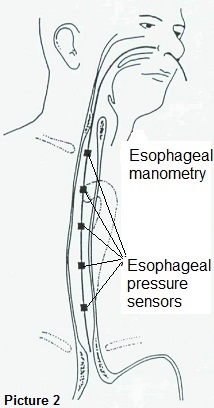 Medical: drugs have a very limited role in the treatment of achalasia due to lack of efficacy and frequent side-effects. They are only used when a patient is not fit or willing to undergo other treatments.

Surgery is the mainstay of achalasia treatment. At operation (Heller myotomy), muscle fibers of the lower esophagus are divided and separated to allow esophageal contents to empty into the stomach (Picture 3). A Heller myotomy is always combined with wrapping the uppermost part of the stomach around the divided muscle fibers (Dor fundoplication) to prevent gastroesophageal reflux (Picture 4). 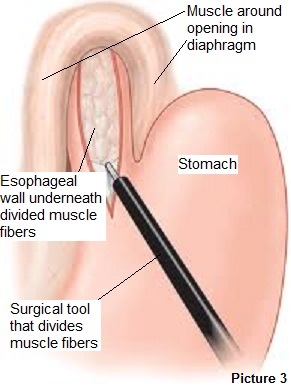 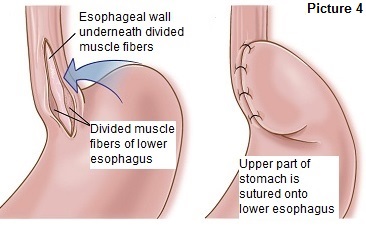 Recovery after surgery: Most patients are hospitalized for 1-2 days and feel well enough to ambulate on the day of surgery. Diet is restricted to clear liquids for 3 days and then pureed foods for an additional 3 days approximately. There are no long-term dietary restrictions. Pain after surgery responds to simple analgesics such as paracetamol and non-steroidal analgesics. Lifting weights over 5 kg is avoided for 6 weeks.

Society of American Gastrointestinal and Endoscopic Surgeons Guidelines for the Surgical Treatment of Esophageal Achalasia, May 2011. http://www.sages.org/publication/id/ACHALASIA/

Barrett’s disease is a change in morphology of the cells lining the innermost layer of the esophagus. It is a complication of gastroesophageal reflux disease (GERD) that affects approximately 2% of the general population or 10% of patients with GERD, even if no symptoms of GERD are present. 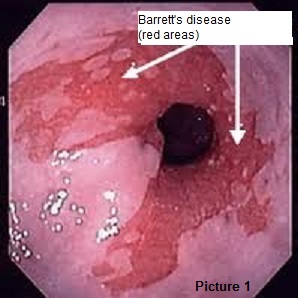 However, its diagnosis is not based only on this appearance, but on microscopic examination of biopsy specimens. In addition, biopsies will show if dysplasia is present in addition to Barrett’s disease. Dysplasia can be low- or high-grade and it signifies a further step in the progression to cancer, especially if high grade dysplasia is present.

Treatment of patients with Barrett’s disease has 2 aspects:

(a) Drug therapy: all patients with Barrett’s disease are initially treated with acid suppression medications. However, 15-80% of patients will have continued esophageal exposure to acid despite such therapy. 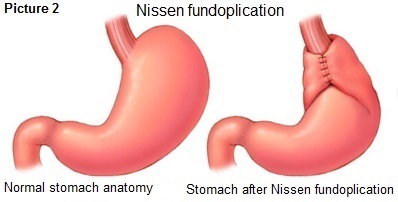 Indications for surgical treatment are:

2. The second parameter of therapy in Barrett’s patients is endoscopic surveillance and treatment, aiming to prevent cancer and promote early cancer diagnosis. Endoscopic surveillance is recommended by most expert panels in the U.S.A. and U.K. and is based on endoscopic biopsy at intervals dictated by the presence of dysplasia and its severity:

Patients with dysplasia have a 30% risk of developing cancer within 5 years of diagnosis. Hence, dysplasia is an indication for endoscopic therapy to resect or ablate dysplastic areas to prevent cancer. Two such treatments are 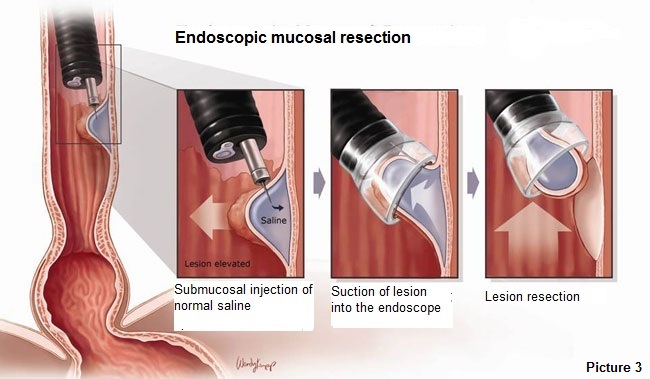 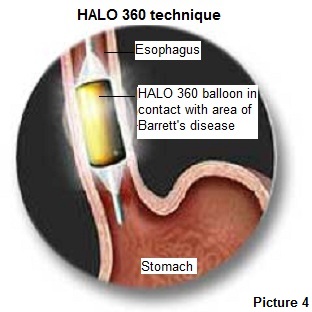 These techniques can reduce the need for esophagectomy (esophageal resection), an operation with risk of significant complications. However, esophagectomy remains the only option in some patients with dysplastic Barrett’s disease.

To watch Dr. Ballian’s talk on Barrett’s disease at the University of Wisconsin, click here http://videos.med.wisc.edu/videos/31324

Hiatal hernia (HH) is a protrusion of abdominal contents into the chest through the opening in the diaphragm (‘hiatus’) normally occupied by the lower esophagus (Picture 1). It is caused by a combination of weak diaphragmatic muscle at the hiatus and a pressure difference between the chest (low pressure) and abdominal (high pressure) cavities, that pushes abdominal organs into the chest. The prevalence of HH is about 10% at age 40 and increases to about 50% in people aged over 70 years. 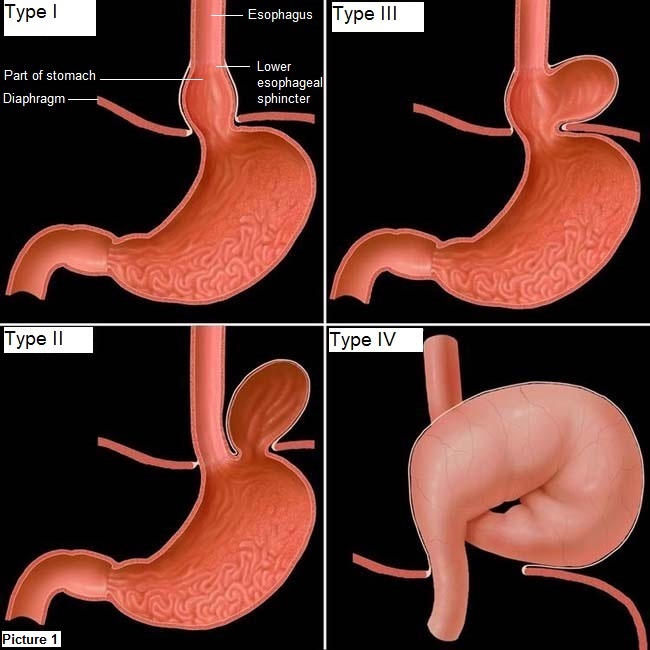 From the four types of HH shown above, type I hernia is the commonest (95% of total) and may not cause symptoms if small. In a type I hernia, the lower esophagus and part of the stomach move into the chest. As a result, the valve mechanism of the lower esophagus that prevents stomach acid and food from moving up towards the esophagus fails, causing symptoms of gastroesophageal reflux (heartburn and regurgitation).

Type II, III and IV hernias are paraesophageal hernias. Type II hernias are rare; as seen, the lower esophagus remains in the abdomen while part of the stomach herniates next to it. Type III hernias are the second commonest; the lower esophagus and a significant part of the stomach are in the chest. Type IV hernias evolve from untreated Type III hernias, when over time the entire stomach and sometimes other organs move into the chest. Patients with type III and IV hernias often have symptoms of gastroesophageal reflux. In addition, many will feel chest pain/pressure and shortness of breath after a meal, as a full stomach will push against surrounding chest organs.
Symptoms
Chronic symptoms

Some patients with type III and IV HH will suffer acute complications such as volvulus (hernia contents twisting around themselves) or strangulation (compromised blood supply of hernia contents) (Picture 2). These patients will have acute chest and/or abdominal pain, inability to swallow and vomit. 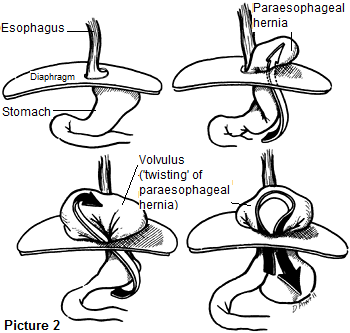 HH can be an incidental finding of an imaging study performed for unrelated symptoms (e.g. chest xray, CT/MR scan of chest/abdomen, contrast swallow study). A CT scan will accurately define the anatomy and contents of a HH. Esophagoscopy (upper endoscopy) can be performed to demonstrate bleeding from mucosal ulcers or in the setting of acute symptoms to examine for viability of the esophagus.
Treatment

At operation, the stomach is reduced back into the abdominal cavity 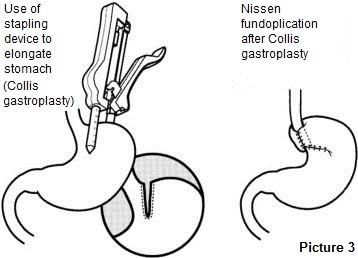 The diaphragmatic opening is narrowed with sutures to prevent hernia recurrence

which sometimes requires use of mesh

In patients with gastroesophageal reflux, an anti-reflux procedure (fundoplication) is performed, i.e. part of the stomach is wrapped around the lower esophagus

It is then sutured at this position

to reconstruct the non-functioning valve mechanism that prevents gastroesophageal reflux. In patients without reflux and in those having emergency surgery, the stomach is sutured to the diaphragm and lower abdominal wall.

Recovery: after elective surgery, patients are hospitalized for 2-4 days. Depending on repair technique, clear liquids are allowed 1-2 days after the operation. Ten to 15 days after surgery, all dietary restrictions are lifted. Pain responds to mild analgesics that are usually required for 1 week approximately. Lifting more than 5 kg is avoided for 2 months.